Ah, the wonderful aroma wafting up from the freshly baked muffins enhanced by the agreeable whiff of the recently ground coffee that will soon be warming the finger tips left tingling by a slight nip in the air – summer is on its way out. Yes, we are gathering in the dining room of the stately Palazzo Steyn preparing, once again to hit the M1 North, to go up the Eastern side of Pretoria and then to turn right onto the R501 to Cullinan.

Carolyn breezes in, trademark red hat at a slight angle …. just so, cooing at BB and Blondie, the two Yorkies that have complete control of the house, well almost.

‘Morning Annie, Jono, Jaco, Brendan, is this us, who else are we waiting for, where is Trudy? oh good you have already started eating, Martins a Cappuccino if you please, hi Trudy, Jaco- we need a T-shirt for Trudy, what time did you leave home, I’m a bit nervous for today, come come its almost 8am, where are the MCC guys – what … ah meeting them at Zonderwater?’

Places are allocated in the two big Toyota machines and we settle in, waving good bye to the staff members in the garage who are hard at work sorting through the piles and miles of blankets and scarves.

Surprisingly, very little traffic on the road, and before you can count to 67 we have arrived. The guards give their customary good-humoured greeting, and in we go. A few pics in front of the main entrance proper to Zonderwater Maximum Security facility. Some find the idea of going into a Max facility a little daunting, others can’t abide being inside the huge mesh fences with the heavily barred windows all in need of a lick of paint. A few minutes later Paul and Garreth, the MCC Aviation guys, arrive. In their possession they have the dinkiest little drone you ever did see, the security guards were as intrigued, by this little flying machine, as we were.

Much jollity and banter as Carolyn and the 67 Blankets recce team, are greeted like old friends, some in our group are old friends, having been to jail many times over the last three years. Clang, Quatlink shurrrr, as the main door is unlocked and swung open, and in we traipse, the 20 metres to the briefing room. All protocols are observed and after a brief introduction by the effervescent Nontobeko Laetitia Redman and a slick talk from area Commissioner Baloyi, we are all solemnly ushered back through the big metal gate out through the front door and down to the rugby field or as it is now known … the 67 Blankets #MMM FIELD.

The most amazing site greets the entourage as we wend our way, back past the austere main entrance to the prison – it is as if we have entered a film set, a silent film, circa 1918 perhaps, only no piano enhancing the visuals. And because the wind is at our backs, all we can hear are the mumblings of the odd conversation quietly taking place within the recce party and the almost imperceptible sing song scrunch of small stones under a variety of footwear.

106 men, all dressed in orange pants are on a huge stretch of black plastic the size of a rugby field. Some of the men are completely stationary, others walk as if the 100-year-old film was playing in slow motion, some in t-shirts, most wear the standard Correctional Orange with circular branding, ‘Corrections’ in black. One of the inmates is talking animatedly to three chaps, making a windmill motion with his arms, the windmill stops abruptly and the right arm points sharply in ‘that’ direction. The 100 x 1.6metres of joined crocheted blankets starts sliding like a slow flat Anaconda into a straight line stretching from the beyond the North try-line to the South-try line. The ‘Windmill’ looks over in our direction, issues a few instructions and makes his way purposefully towards us.

Greetings all round and the ‘Windmill’ man is non-other than Musi Kunene, project manager on the inside and all-round amazingly competent human being. After introductions to the first timers, he turns back to the field and goes once more into the Windmill motion adding a high-pitched whistle. As the arms start tilting, so, the 106 begin moving in our direction, they break the movie tempo and begin jogging – a chorus of greetings and thank you’s and compliment’s and well done’s. Right! This is what we need …. 7 more hammers – 200 long nails – a loud hailer – 1000m of fishing line – and the most important item on request is ….. A braai on the 25th, the day after the #MMM Launch. The DCS members all nod their heads in Carolyn’s direction – she nods Yes? Much cheering, and back they go to their stations to carry on unfurling the endless rolls of crocheted blankets, 8064 metres squared worth!

I am called to one side by two staff members, Hentie and Victor. Hentie has a friendly smile circumferenced by a big grey beard with some brass on his shoulder and he is responsible for security and Logistics. Victor’s visage is of a strangely inscrutable countenance, not sullen but more like a polite sullen, dressed in brown with no brass. Victor is the Zonderwater electrician and would like to discuss how we are going to power the event. ‘I have obtained a quote for a 70 KVA generator, what have you got?’ They point towards a strange looking brick building with small windows, ‘in there’ they say with a sway of their heads, ‘is a very big generator.’ I’m not sure if they have said this with pride or a hint of misgiving, ‘We will go there after the marquee discussion.’ Neither are looking at me, so I let it slide..

The marquee on order is purportedly 50 x 30 metres, a space a little less than half a rugby field and will accommodate 1000 invitees easily, with more than enough room to include an 8 x 10 m stage upon which world class entertainment is going to rock the crowd …. Wouter Kellerman, Tim Moloi, Mauritz Lotz, Neill Solomon, Craig Urbani, Proverb, amazing artist Jon Adams, little Ella Grealy and a selection of Zonderwater offenders who have written songs and stirring poetry that they will be showcasing between the speeches by the various dignitaries, VIP’s and 67 Blankets stakeholders. So, Hentie, Victor and I pace the marquee floor area and unanimously conclude that the marquee and the #MMM will fit like a glove on the field.

We arrive at the brick building with small windows, definitely a strange building, obviously an add-on to the original Facility design. Victor rummages through his keys like a jailer until ….. and opens the lock with absolutely no fanfare or aplomb, just sticks the key in the slot, twists his wrist, the lock opens, Victor opens the door and ushers us stoically in.

Now, I am not an engine oracle but when Victor began talking, a half a tone higher than his monotone of the last two hours, about this almost 50-year-old Rolls Royce Genny, I paid attention. He explained how the one side of the huge machine could be unscrewed, carried around to the other side, reattached … and off it goes. Hentie announced, with a similar note of pride, that this beautiful machine pushes out well over 250 kVA’s, impressive! As I stare at this beautiful piece of engineering my mind wanders back to the Movie ‘The Battle of Britain’ and that the battle was won with the immense help of the ‘Spitfire’ fighter plane, propelled at speeds of almost 600 kilometres an hour by a Rolls Royce engine not unlike what was standing in front of me. The Battle of B took place 17 years before I arrived mewling and puking in my mother’s arms. We had both aged pretty well.
Tick box – power supply good even if it is 200 metres away from where we need it.

As we exited the brick room I noticed a flurry of activity on the South side of the #MMM, the security guard who had been racing his brown shiny steed skilfully up and down the perimeter fence slowed to a trot and then a walk, craning his neck. The two security guards, yes two, on the quad bike also slowed to a halt, staring over their left shoulders. The old chap sitting on his sit-on-lawnmower didn’t bat an eye in any direction. It would appear from his slightly slumped bouncing posture and his opaque dead eyes that this gentleman had not noticed or said anything since 1994. Members of our group began converging, as did a few of the inmates, the focal point was Garreth the MCC pilot who was sending the drone skywards. You could cut the anticipation with panga – the excitement spread across the field in seconds, the moment had arrived, how would the # MMM look from the sky, how would the days, weeks and months of challenging work pan out? The planning and organisation had been not unlike the logistics required in averting a world war. No one said a word, a complete hush descended over the entire correctional facility, the only sound was the gentle hum of the lawn mower, a sound from another time. The horse neighed quietly looking a little embarrassed at the ‘lawnmower’. Paul says, ‘That’s the shot.’ Garreth grunts and with delicate finesse starts the drone back down to the ground. Everyone craning to see the result of the picture from the sky, still not a sound. Until Garreth says, ‘it WORKS!’ Carolyn has a look and gasps, Musi has a look and a tear comes to his eye. 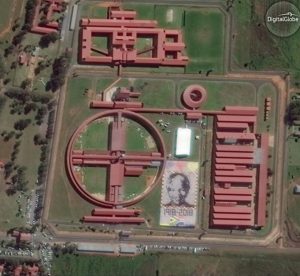